Careers Why Buy From Us Our History Contact Us Training Centre

The Kenworth Legend SAR is the third in its Legend series, and we feel privileged to have taken it for a drive…

The Kenworth Legend SAR needs little by way of introduction to many of our readers. It was one of the real stars at the 2021 Brisbane Truck Show, and it is one of our most-read stories every time we put something up about it on Trucksales.

But before we get into the nitty-gritty of the Legend SAR, it’s important to understand what it stands for, and for me it stands for one thing: heritage.

The Legend SAR’s raison d’etre, or reason for being, is to celebrate the 50th anniversary of the design, engineering and building of Kenworth trucks in Australia. And as such, it harks back to bygone era where drivers really had to drive their trucks. 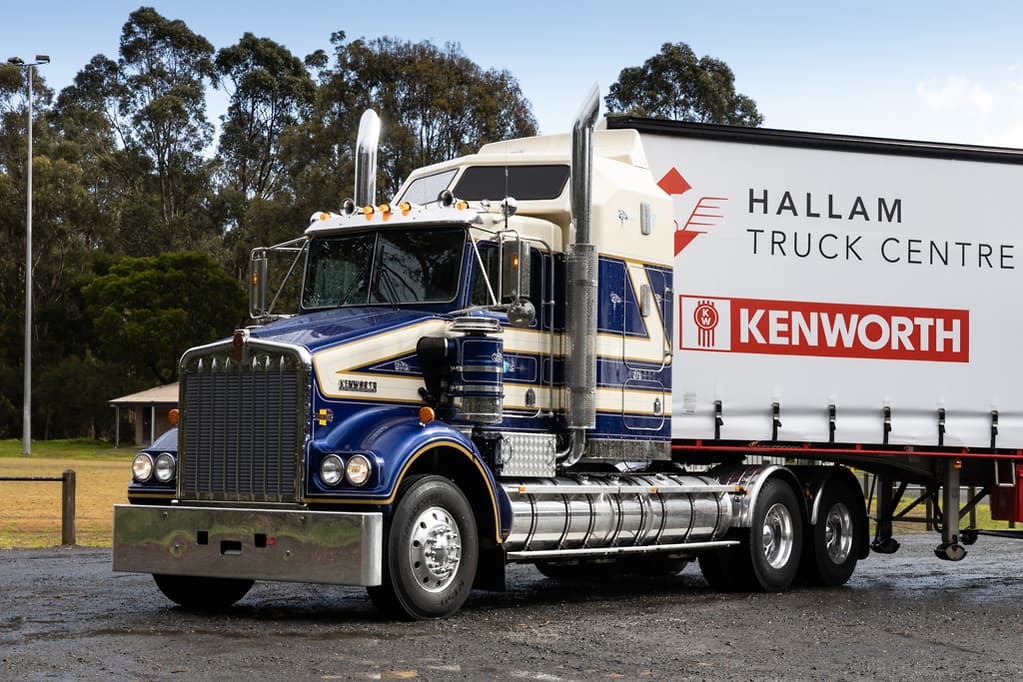 So the Legend SAR (SAR meaning Short-bonnet, Australian, Right-hand drive) has few in the way of driver aids, and you’ll see that as we go along on this journey through the ages that the Kenworth Legend SAR represents.

You can no longer order a Legend SAR, by the way. It was on sale for just one day – July 8 – and during that 24-hour period, Kenworth sold over 700 of them. But that’s it. No more.

The truck I was fortunate enough to get access to for a couple of days was the original. Not an early build, not Number One, but Number Zero. All Legend SARs will come with a numbered plaque on the glove box. Not this one, though. It has just the plaque – no number. It’s the original truck we saw at the Brisbane Truck Show.

This truck is dubbed ‘Son of Nugget’ in reference to the iconic W-series limited-edition ‘Gold Nugget’ released in 1984, and I was told that it won’t be sold. It’s destined for the Kenworth Hall of Fame and will probably be rolled out only on special occasions and for the odd convoy run. 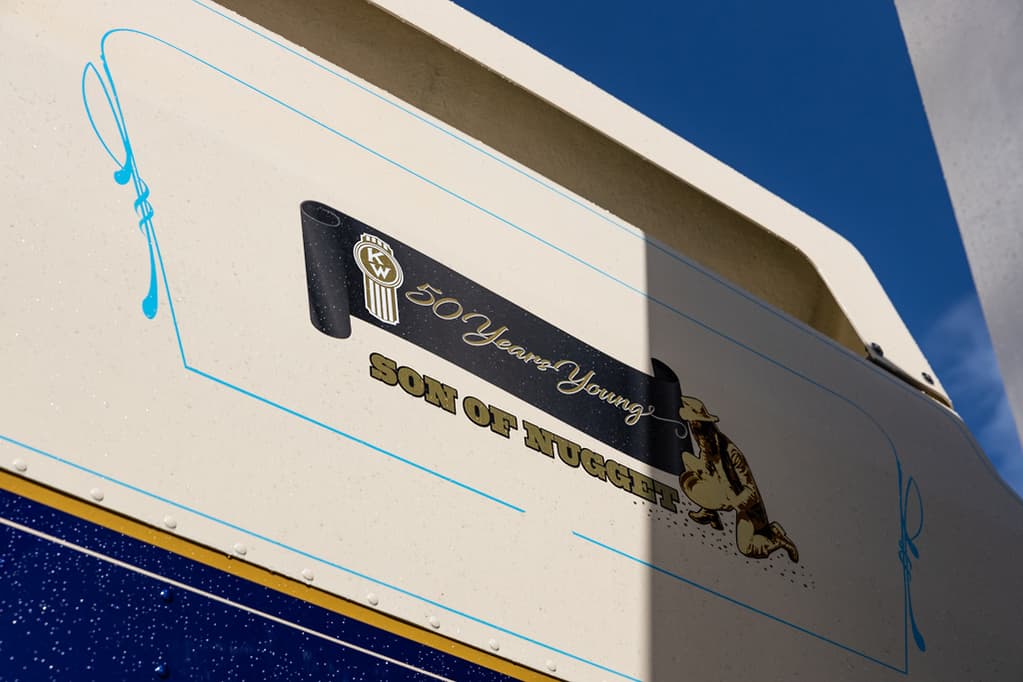 The Son of Nugget livery adorns the back of the cab.

Hence, I was understandably a bit nervous when I first took the wheel and rolled out of Kenworth’s Bayswater plant, no doubt driving like Grandma used to drive her Morris Minor…

Climbing up into the cab using the extruded aluminium tank steps on the big, round fuel tanks and sneaking past the heat guards on the seven-inch vertical stacks, I had a feeling of excitement and, well, pride, as I eased in to the comfy suspension seat (did they have those on the W900SAR on which this truck is modelled? I don’t think so, but never mind…).

Inside, it’s all Kenworth. The familiar diamond pleat trim, the big four-spoke steering wheel and the commanding view over the sloping bonnet all point to the Kenworth legacy. 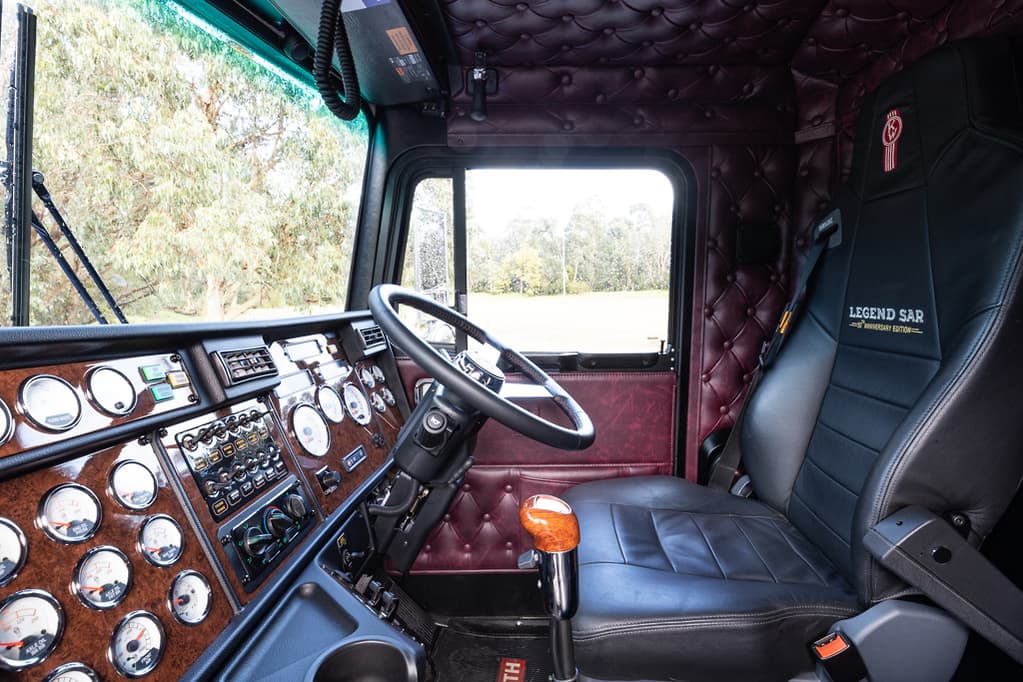 The interior is all retro, right down to the air-operated windows, and not a screen to be seen.

Spread before me on the flat dashboard was a vast array of chrome-rimmed gauges that give the driver an instant snapshot of what’s going on in the engine bay, transmission and axles. Once familiar with them, I found them really interesting and I marveled at how cool the transmission was running (I was told they all run transmission coolers).

There’s also big bank of toggle switches for everything from the lights to the Jake brake. A couple of toggle switches I found fascinating were the ones for the air-operated windows. I was told the one for the passenger window is right where it was on the W900.

It’s all there, and not a digital or TFT screen in sight! 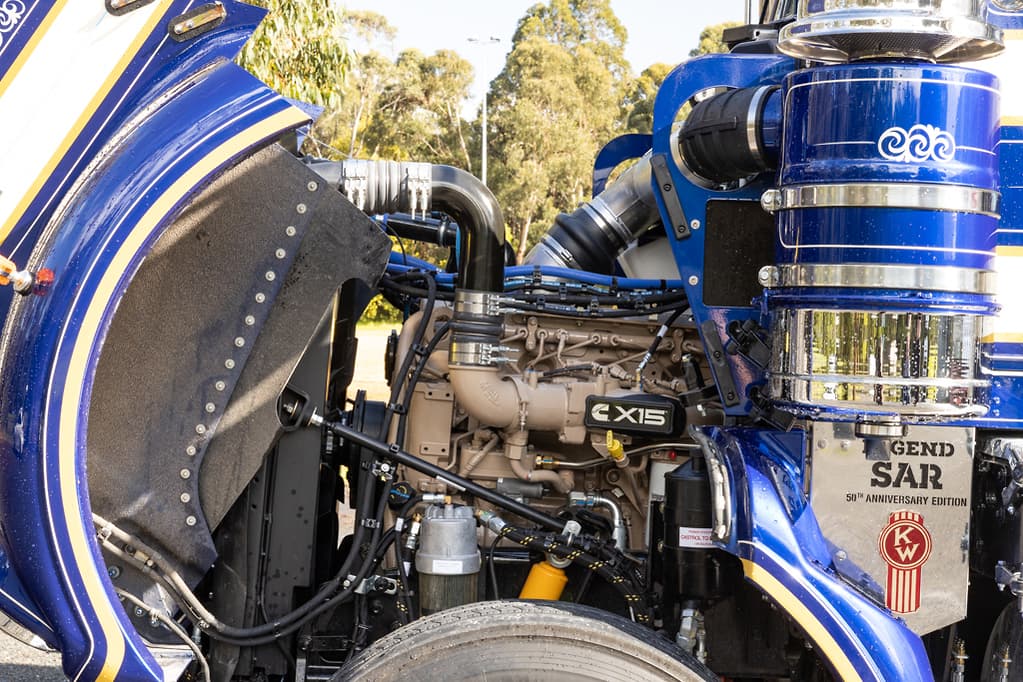 The Cummins X15 engine is specially painted beige to acknowledge the Cummins heritage.

I hit the key and the Cummins fired up. The Legend SARs are all powered by the Cummins X15 and ours was rated at 550hp and 1850ft-lb of torque (2508Nm). And, of course, you have to have the Eaton 18-speed Roadranger gearbox.

I slipped it into first and eased out into the traffic on a pretty filthy Melbourne morning.

The view from the driver’s perch is surprisingly good. The windscreen is a flat two-piece affair, but there’s plenty to see. Just the hint of the bonnet as it angles off, and the peripheral vision is good even though the side windows are comparatively small. The big mirrors give ample view aft and they’re heated for those crisp morning starts like this one. 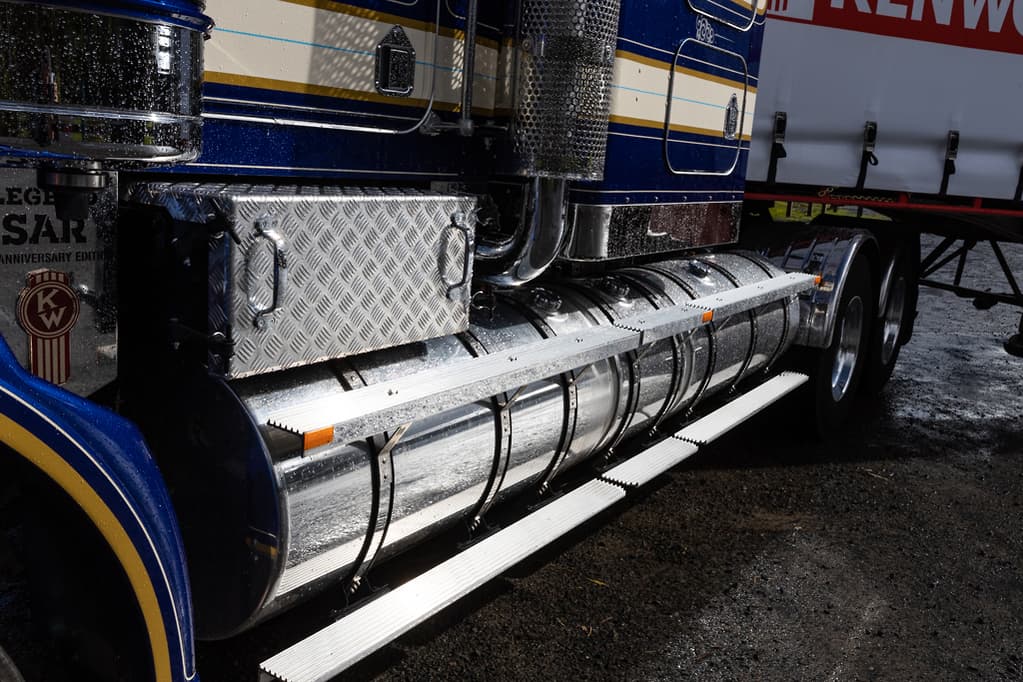 Big round tanks and aluminium steps are a feature, and note the custom battery box with sharp angles like the ones of yesteryear.

The grunty burble of the big 15-litre Cummins is certainly there but the cabin is well insulated and it’s easy to hold a conversation.

We were hauling a single trailer and were at about 38 tonnes, but the Legend hauled it with ease. You can spec these trucks to 135 tonne, I was told, but we were pretty light on for our run. I was impressed with how the Cummins could lug down low in the taller gears and ease up the hills, and the manual ‘box surely helped here.

I hadn’t driven a Roadranger for literally years – virtually all the test trucks we get to drive these days are automatics or automated manuals, even in heavy duty – and it was great to get out and swap the cogs manually again. I crunched a few to be sure, but had a great time doing it!

We charged out through the Yarra Valley making the occasional stop for photography, and it was surprising how much attention the Legend got along the way. Word has certainly got around and people were materialising seemingly out of nowhere to check out the truck. 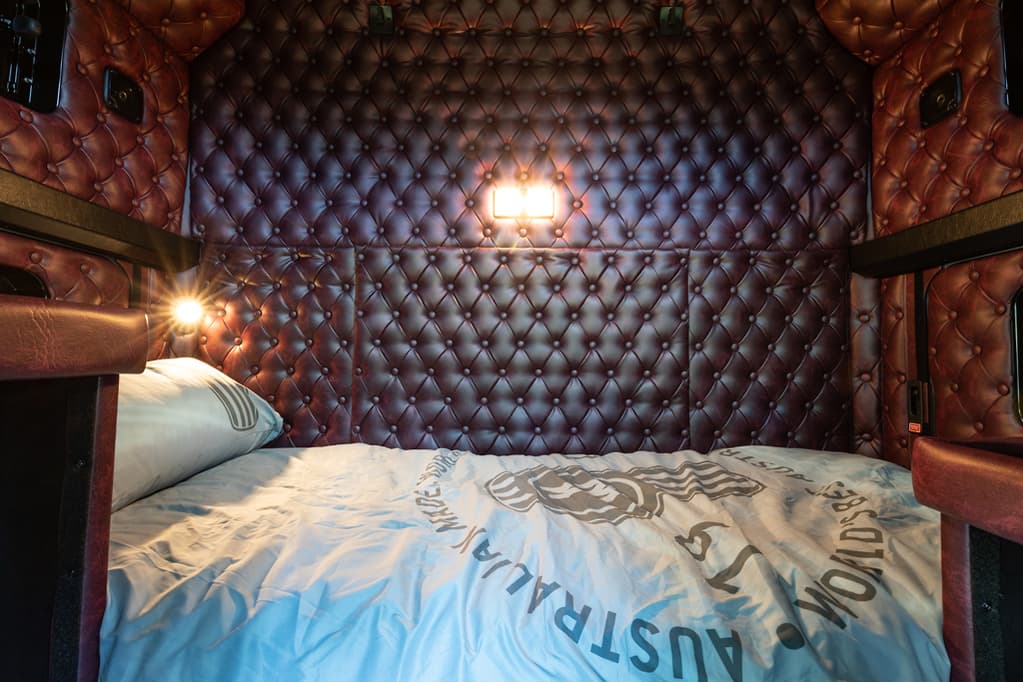 Getting into the sleeper can be a squeeze for larger drivers, but one in there it’s roomy and oh-so comfortable.

At one stage a couple of guys in a ute must have spotted us from the road and promptly did a U-turn in pursuit. They hurtled into the carpark in a cloud of dust to where we were taking photos and demanded: “Who’s driving this? Can we take a look?” Sure boys, go for your life but watch your boots in the cab…

Then it was off again cruising through the rolling paddocks and vineyards of the Yarra Valley, occasionally flicking on the toggle switch that activates the Jake brake and rejoicing in the throaty roar of the brake out of the big vertical exhausts. Then hit the other toggle switch for the second stage and hear the note change an octave or two as the retarder hauls the truck back. Love it!

Time seemed to march on a bit too quickly as it does when you’re enjoying the day, and we pulled into a truckstop for a late lunch. After a quick sandwich and a cuppa – and the obligatory chat with some other drivers – we turned our big blue rig for home.

On the run home, I had more time to enjoy the drive and appreciate the way the Legend handled. The steering is nicely weighted, with enough feel in it to let you know you’re ‘driving’; it’s not over assisted. Sure there are a few turns lock to lock, but you get used to that and on the road, the steering is more direct than I thought it’d be. 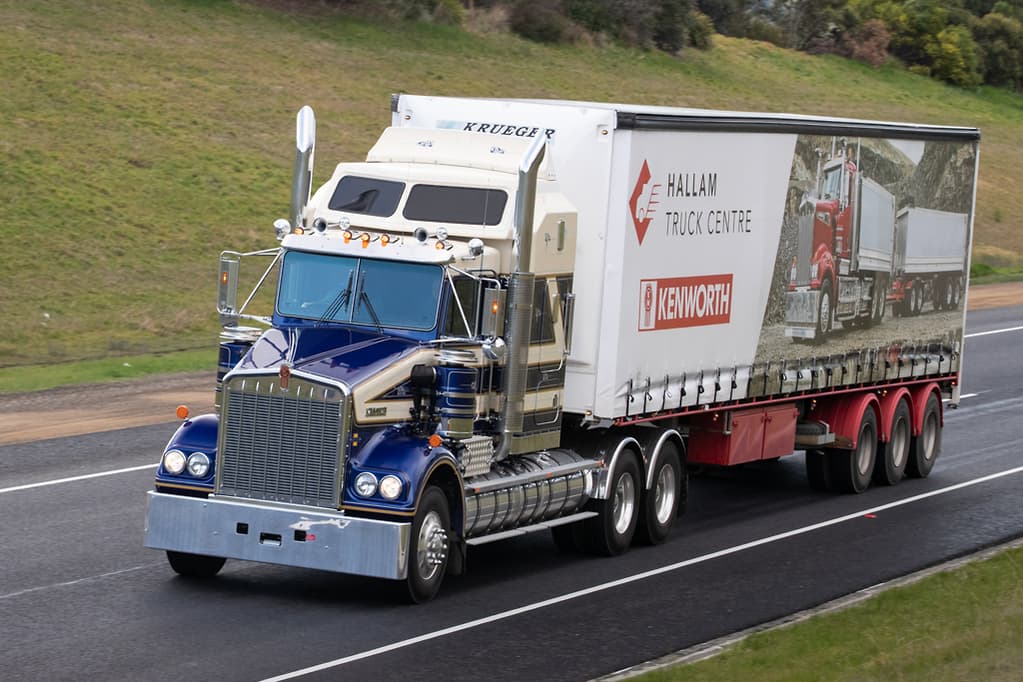 The Legend SAR was a dream to drive and we got heaps of attention on the road.

It’s easy to put the truck exactly where you want it on the road and there’s no slop or play in the steering.

Similarly, the ride is better than I had envisaged. The rear suspension is Kenworth Airglide 460 and it gives a really compliant ride. I was told by a Kenworth exec who accompanied me on day two of our Legend experience – and who drove the truck from the Brisbane Truck Show back to Melbourne – that it’s actually quite good even bob-tail.

Back at Kenworth HQ at Bayswater I had time to check out the finer points of the Legend SAR, and the attention to detail is really quite remarkable. Like the big four-inch indicators on the front guards – they’re crafted to look like the old originals, and even have the Kenworth Bug on the back lens. It’s a wonderful touch. 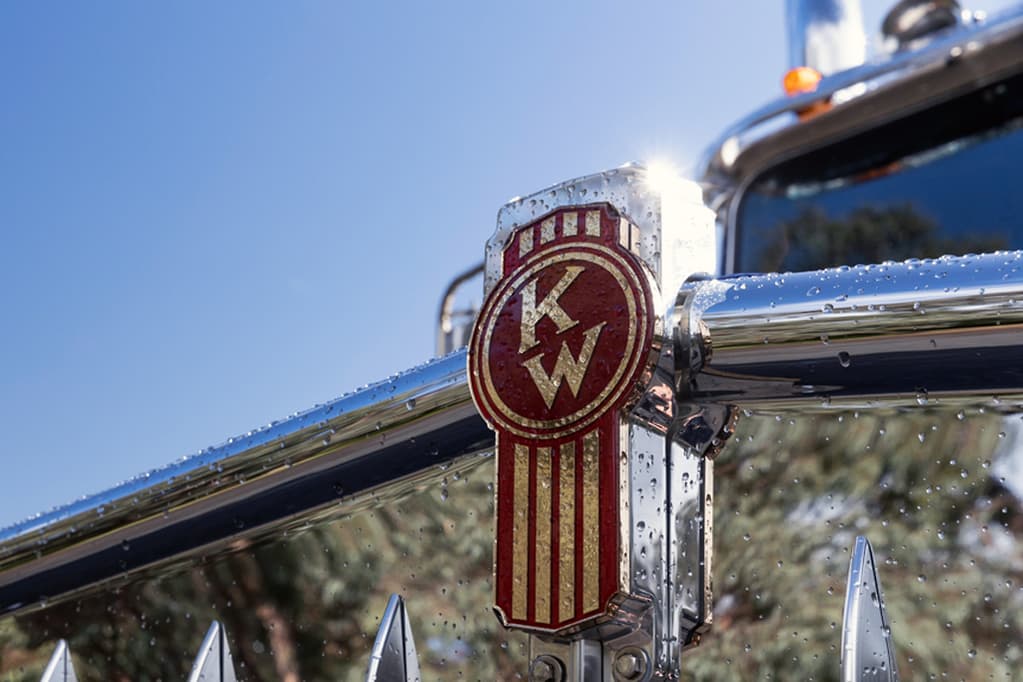 Attention to detail: how about the red and gold italic Kenworth bug atop the classic grille.

And the bullet-style clearance lights on the top of the cab. You can really see that a lot of thought has gone into the design of this truck.

I had time to climb around inside and although you can’t stand up in the cab and it’s a bit of a squeeze to get into the big 50-inch sleeper, once you’re in there, it’s a really, nice cosy place to be. There’s plenty of storage around the sleeper and under the bunk for all your gear and clothes, and there is room for a fridge and a place to mount a tele if you want.

I could certainly see myself racked out in there, quite comfortably pushing out a few zeds.

In a time when a ‘limited edition’ can just be a bunch of graphics and some well-placed plastic adornments, this truck stands out as a real limited-edition model in its own right; it’s a classy throwback to the heritage accrued by Kenworth brand over the past 50 years.

Well done Kenworth and congratulations to the future owners of these fine trucks.